WAR Catch Wrestling is a real “crash course” in the fundamentals of Catch-As-Catch-Can Wrestling and showcases the holds and techniques shown to MMA legends Josh Barnett, Kazushi Sakuraba, and the roster of fighters in the UWFiUWFi was a shoot style professional wrestling promotion in Japan from 1991 to 1996. Coach Billy Robinson was an instructor and Head Coach at the renowned UWF Snake Pit Japan gym in Tokyo after he retired from the ring in 1992. As Head Coach he tutored many MMA legends and shoot-style professional wrestlers in the art of catch-as-catch-can wrestling, including Josh Barnett, Kazushi Sakuraba, Kiyoshi Tamura, Yuko Miyato, and Yoji Anjo. by legendary coach Billy Robinson! 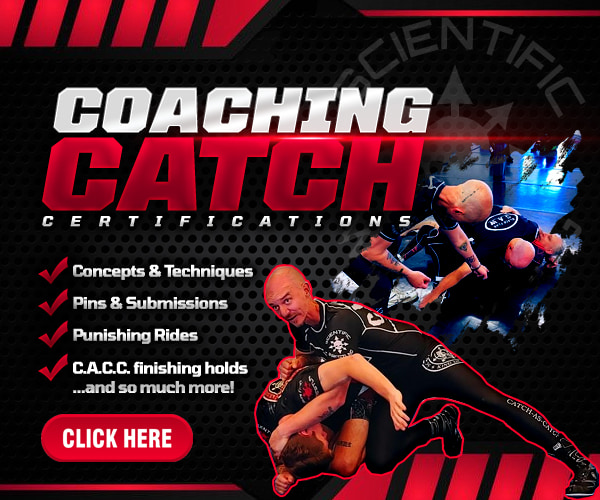 Suffice it to say that without catch wrestling there would be no mixed martial arts. Catch wrestling’s influence in the American amateur circuit and its profound effect on the Japanese pro wrestling scene have helped shape the development of MMA into what it is… Read More

Billy Robinson died in his sleep on March 3, and the combat sports world lost its last living link to an era of catch-as-catch-can submission wrestling competitions that packed rugby stadiums in England in the first half of the 20th century. The hard-charging… Read More

Harry Smith is a third-generation professional wrestler, a star in New Japan, and addicted to learning more about his craft. To further his training, he sought out Billy Robinson for further tutoring on the grappling game. Today, he shares some of the lessons… Read More

Earlier this month, Billy Robinson, a hallowed name in pro wrestling circles, a man who built a reputation grappling for the entertainment of others through more than four decades, passed away. But Billy Robinson wasn’t just a pro wrestler. Beneath the gloss… Read More

Billy Robinson’s legacy: A Godfather of the Japanese MMA/pro-wrestling connection

Goodbye, Billy Robinson. If you haven’t heard the news, the Human Windmill died in Little Rock, Arkansas. Most people reading this article will have little knowledge of who Billy Robinson was or what he represented to the combat sports scene in Japan… Read More

Billy Robinson, the legendary Catch Wrestling coach from Manchester, England, died yesterday at the age of 74, while he slept. Robinson was well known in Japan for having contributed to the evolution of mixed martial arts and shoot wrestling… Read More

WWE is saddened by the news that Billy Robinson has passed away. Equally influential as a submission specialist and a trainer of Hall of Fame talent, Robinson was a champion amateur wrestler in England in the 1950s before learning the dangerous art of catch… Read More

My Afternoon with Billy Robinson

“GUYS!” I heard this in my nightmares for weeks. A thick, hoarse, British accent bellowed this word throughout a church gym in southern Kentucky. “If you don’t pivot you’re going to drop him on his skull,” the voice said in a lower voice, as opposed to the urgent… Read More

An iconic fighter, Sakuraba was aggressive, charismatic, amazingly skilled, and too tough for his own good. Sakuraba’s ability and flair for the dramatic would make him one of the most beloved MMA fighters in history. When looking at MMA fighters who have… Read More

Billy Robinson – The Man Behind The Gracie Killer

Many MMA fans are only vaguely aware of Billy Robinson. One of the old breed of British Catch-As-Catch-Can wrestlers, who were the underpinning of the old school territories system back in the 1970’s professional wrestling scene, he was and still is a legitimate… Read More

I caught up with MMA main-eventer Josh Barnett at the latest Scientific Wrestling clinic featuring Billy Robinson. GONG Magazine in Japan asked me to interview him and this is the exclusive English version. SW: How did you meet Billy Robinson? JB: I met… Read More

DISCLAIMER This page has been made publicly available and these hyperlinks are provided for personal research, educational, and informational purposes only.

Resources and articles on this website are generally in excerpt format, with a link to the original piece, and fall within “fair use” for purposes such as criticism, comment, news reporting, teaching, scholarship, and research. The provision of any URL, link, and recommended reading material is done for the convenience of users of this website. It does not constitute an endorsement by Lion’s Share Ventures, LLC of the information provided.

We take no responsibility for the content of websites we supply links to (other than our own subsidiaries), nor should our links be taken as endorsement of any kind unless otherwise stated.

Home / Terms / Privacy / Disclaimer / Affiliates / Contact
ClickBank is the retailer of products on this site. CLICKBANK® is a registered trademark of Click Sales, Inc., a Delaware corporation located at 1444 S. Entertainment Ave., Suite 410 Boise, ID 83709, USA and used by permission. ClickBank's role as retailer does not constitute an endorsement, approval or review of these products or any claim, statement or opinion used in promotion of these products.
NOTE: Before participating in any martial art, you should consult your physician, have a certified adult competent martial arts instructor present, consult with a parent or guardian and agree to be of legal age and to use responsibly. You should be aware that if you practice or study Catch Wrestling, “Scientific Wrestling”” or for the “SW Catch Wrestler Audit””, or to be a “SW Catch Wrestler””, you are doing so entirely at your own risk which includes: any past, present or future physical, medical or psychological pain or injury whatsoever that you may incur or receive. When training you may receive pain and injury.
All original logos, photographs, and brands featured are property of their respective owners.
© 2022 Lion’s Share Ventures, LLC All Rights Reserved